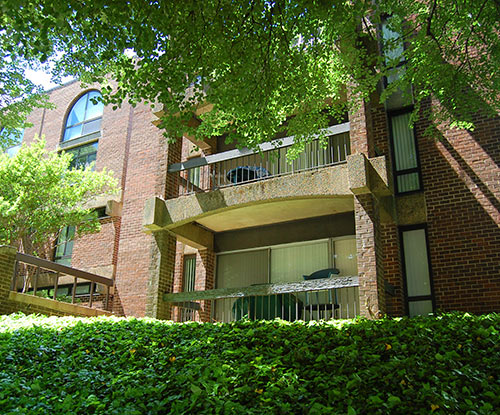 Overview: The Commons of McLean, a residential rental property in Tyson’s Corner in Fairfax County, Virginia, was designed by modernist architect Charles Goodman. Located in the Washington, D.C. metropolitan area’s most populated region, the 1965 apartment complex’s location made it ideal for replacement by a much larger complex.

Challenge: Caught between two Fairfax County directives to evaluate buildings potentially significant to Fairfax County history and to help make the car-centric Tyson’s Corner into a walkable, environmentally sustainable community, property owner LCOR turned to History Matters to research the property’s architectural and historical significance and to prepare an objective documentary report of its findings for Fairfax County.

Solution: Utilizing History Matters report, Fairfax County acknowledged that some parts of the complex were significant to its local history while still approving LCOR’s application for re-zoning of the property to make way for modern, high rise buildings. As a condition of the re-zoning, Fairfax required LCOR to document the buildings and their setting and to create a lasting tribute to the architect Charles M. Goodman.

Result: History Matters was able to facilitate Historic American Building Survey (HABS) documentation of the buildings set for demolition. This was a relatively rare instance of HABS, a division within the National Park Service, documenting a non-public development. The documentation is part of an archive at The Library of Congress. The second proffer required a lasting tribute to the original architect of the property. The proffer was vaguely written and could have required historic restoration of the properties set for demolition. An alternate solution was proposed and approved by The County. History Matters worked with a web design group to create the site, An Uncommon Architect. History Matters assisted in providing content and images. LCOR received approval on the zoning in time to meet the construction schedule. 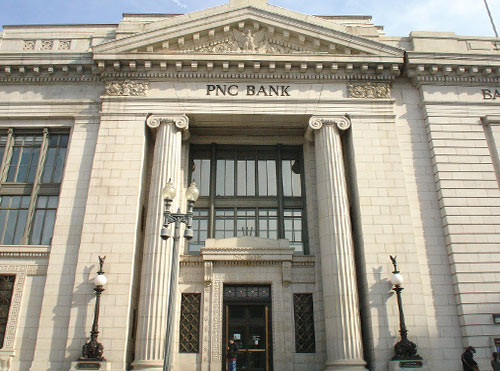 Overview:PNC Realty Services manages all aspects of PNC's real estate needs by teaming professional consultants in architecture, engineering, and all related fields to ensure smooth operational process from due diligence through completion of construction.

Challenge: PNC has banking branches in 19 states and the District of Columbia. When PNC opens new banking branches, it obtains permits from the U.S. Office of the Comptroller of the Currency (OCC). As part of the OCC permitting process, PNC must certify that it has met all requirements of Section 106 of the National Historic Preservation Act. PNC also certifies that its projects meet all local and state historic preservation requirements.

Result: History Matters has helped and continues to help PNC Realty Services meet and exceed all historic preservation regulations for branches throughout the PNC banking system. 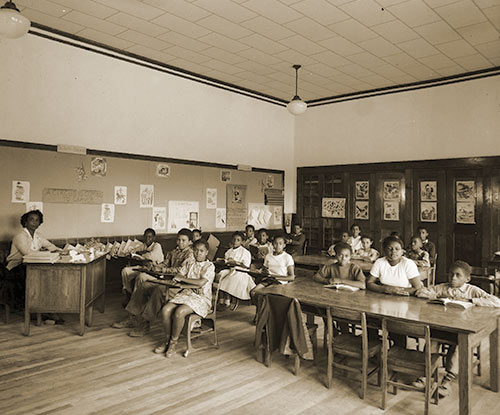 Challenge: LCPS needed to demolish a building whose architecture was not historically significant, but the context in which it was built and the experiences of its alumni were. The 1958 Douglass Elementary School was built to serve as a segregated school for African-American students. Loudoun County did not fully integrate its public school system until the late 1960s. There was little documentation of this period. LCPS wanted a documented history to provide context in order to improve community outreach as well as inform the design of the new building.

History Matters researched and wrote Desegregation in Loudoun County Public Schools, 1954-1969, to supply LCPS with a historical narrative to provide a contextual foundation for the project. The document was used as reference throughout the development, design and construction process.

Result: LCPS shared History Matters’ Desegregation in Loudoun County Public Schools, 1954-1969 with alumni, community stakeholders, and the public and used the report to establish an identity for the new Frederick Douglass Elementary School that opened in 2013. The design of the current school reflects the history in a fashion which allows for the current students to be informed and curious about the history of Virginia’s educational system. LCPS’ approach continues to win awards for the new facility’s planning, design, and civic engagement. 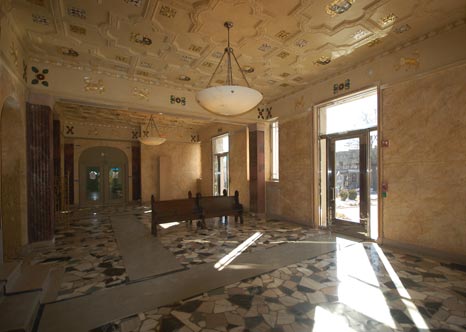 Overview: Built between 1936 and 1937 and located one mile north of the U. S. Capitol building, the Metropolitan Apartments houses just over 160 apartments in the rejuvenated Edgewood neighborhood of Washington, DC. In 2011, MT Properties acquired the property with the intention of restoring it to its historic stateliness.

Lobby of the Metropolitan.

Challenge: After the original owners sold the Metropolitan in the mid-1960s, the building was allowed to fall into disrepair. When the current owners acquired the property, they sought a means to reveal the Metropolitan’s 1930s architecture while providing modern infrastructure and amenities. The apartments are laid out along central hallways that feature terrazzo floors and textured plaster walls and ceilings. The Metropolitan is noted for its historic design and its main lobby, which retains its original configuration and most of its interior finishes, including matching east and west wing marble stairs, a mosaic tile floor, square-edged marble baseboards, and walls clad in Venetian plaster and scagliola pilasters throughout the room. The historic restoration would be more expensive than simply demolishing the historic interiors and starting over.

Though the Metropolitan was designed by George Santmyers, DC’s most prolific architect, and commissioned by Abraham S. Kay, an influential builder and philanthropist, it had not been listed on the DC Inventory of Historic Sites or the National Register of Historic Places. Without such recognition, the new owners could not receive historic preservation tax credits for the revitalization of the building that they wanted to undertake. They consulted History Matters to evaluate if the Metropolitan could be listed on the DC and the National Register.

Solution: History Matters researched the Metropolitan’s history and evaluated the integrity of its architecture to determine if it qualified for historic recognition. We wrote a successful National Register nomination and gained approval for its listing as a DC Landmark. We represented the owners at hearings before the DC Historic Preservation Board. After these approvals, we then shepherded the owners through the National Park Service historic preservation tax credit process in order for them to obtain 20 percent of the Metropolitan’s total rehabilitation costs.

Result: History Matters helped the Metropolitan’s owners navigate interactions with the DC HPO, the DC Historic Preservation Review Board, and the National Park Service. The Metropolitan is now recognized as part of the DC Inventory of Historic Sites and the National Register of Historic Places. With this recognition in place, the owners sought and received approval for historic preservation tax credits and Washington, DC obtained revitalized historic housing. 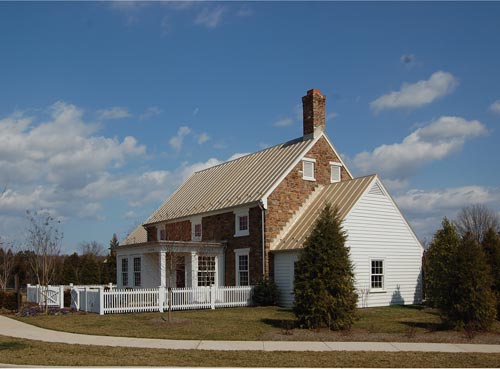 Challenge: Attempts were made by previous developers to create a master planned community on this parcel. The current owners of Willowsford knew the key to making their development a success was to create a sense of place for its residents. The developers knew the area was rich in cultural history due to a vast amount of archaeological excavations that they and previous owners had commissioned as part of the community’s development process. History Matters was consulted to review these documents and assist in the placemaking of the development.

Above: This circa-1800 dairy building was preserved as part of the Willowsford development. History Matters conducted documentary research to identify the building and planned interpretive exhibits for the dairy after its restoration.

Solution: History Matters proposed that Willowsford interpret itself for residents and visitors by weaving the history of the Willowsford area throughout the entire development. History Matters provided an interpretive plan for Willowsford by utilizing previous archaeological studies combined with our new documentary research to create thematic displays throughout the development. We helped landscape and interior designers incorporate the site’s history into designs for Willowsford’s community buildings and walking trails.

Above: Incorporating history into the Willowsford community: The lodge display; outdoor amphitheater.

Result: History Matters helped its founders and designers discover and convey an authentic historical identity for the new development. Willowsford is a successful, master planned community with a thriving residential community engaged with the current and historic context of western Loudoun County. 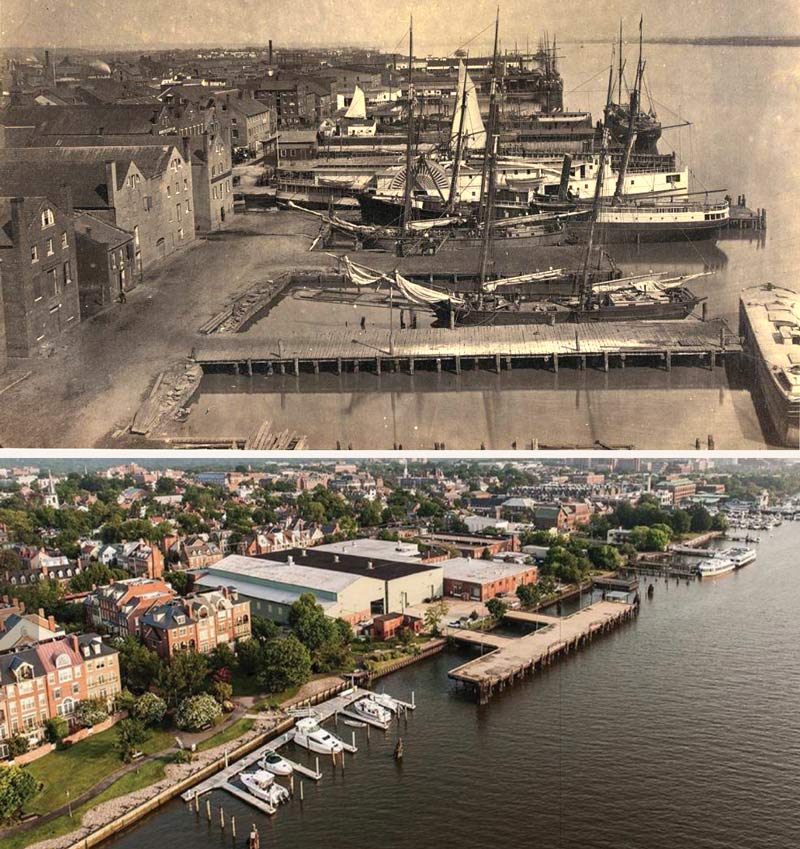 Overview: Robinson Terminal South, a complex of warehouses in Alexandria, Virginia, occupies the block between Duke, South Union, and Wolfe Streets and the Potomac River. Located at the historic site of Point Lumley, the property has provided access to the Potomac River for merchant stores, warehouses, and various industries from the founding of Alexandria in 1749 through the 20th century. Noted developer EYA acquired the block for a mixed-use development of residences and restaurants.

Above: Historic Alexandria Waterfront, then and now.

Challenge: The City of Alexandria tasked EYA with identifying the history of the site, preserving a two-story brick building known as 2 Duke Street, designing new buildings that were sympathetic to the property’s history, and incorporating that history in interpretive elements within the new development. EYA hired History Matters to help it accomplish these goals.

Above: 2 Duke Street. This circa-1800 building was preserved as part of the Robinson Terminal South development. History Matters conducted documentary research to identify the building and planned interpretive exhibits within the new development.

Solution: History Matters provided several products that helped meet the city’s goals. A 55-page Documentary Study of the site provided an illustrated narrative of its history from the 18th through the 20th centuries and; in particular, the study documented the current 2 Duke Street building together with 18th and 19th-century predecessors that were located within its footprint. History Matters also developed a style guide for the EYA architects that outlined the various architectural styles and features of past and present Alexandria residential and commercial buildings. The architects used this architectural vocabulary to inform their designs for the new buildings. History Matters also produced an interpretive plan that helped EYA and its landscape designers focus on the unique historical aspects of the Robinson Terminal South block and incorporate its industrial heritage into the new landscape designs. During every step of the process, History Matters staff met with Alexandria staff to ensure that our products met or exceeded the city’s requirements. 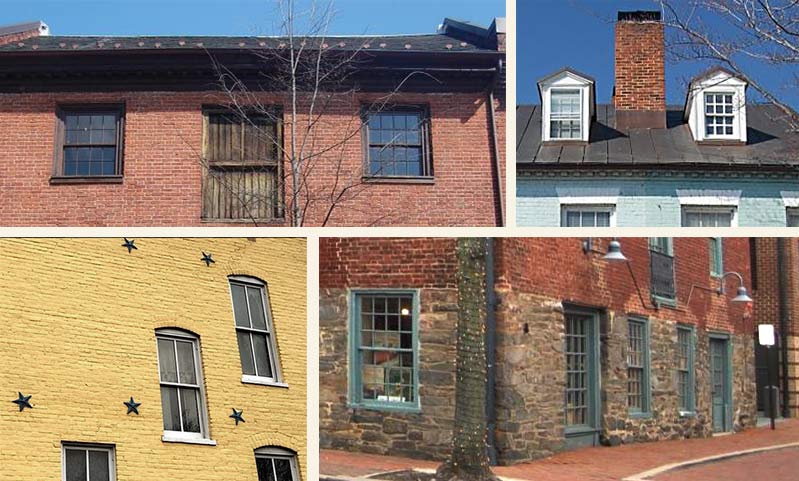 Above: Architectural elements of past and present Alexandria residential and commercial buildings. 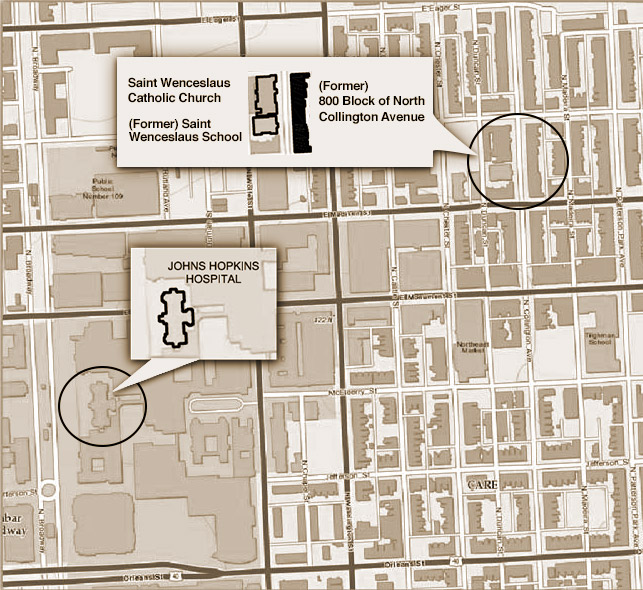 Overview: Since 2011, History Matters has worked with the East Baltimore Development Incorporated (EBDI) and Forest City-New East Baltimore Partnership (Forest City) as they have worked to redevelop 88 acres in the neighborhoods that surround the Johns Hopkins University Hospital campus in Baltimore, Maryland.

Above: Location map, City of Baltimore.

Challenge: Between 2009 and 2011, EBDI and Forest agreed to undertake architectural survey and historical research about selected areas within the redevelopment area. They also agreed to prepare Historic American Building Survey (HABS) documentation for the “painted screens” 800 N. Collington block in East Baltimore, and create a fact-based interpretive marker about the famous East Baltimore alley houses for the new East Baltimore Community School. While the agreements were specific about what was required of EBDI and Forest City, how to fulfill the requirements was not. They turned to History Matters.

In collaboration with RKtects Studio, and conferring with city, state, and federal officials, History Matters provided historic preservation consulting to Forest City Enterprises and EBDI as they developed a master plan for the area’s redevelopment.

History Matters conducted architectural reconnaissance survey for 42 historic resources in the East Monument Historic District of Baltimore which was developed in the mid-to-late 19th century. Mainly residential with some commercial buildings and a few industrial buildings, the neighborhoods north of Johns Hopkins University Hospital remain essentially intact from the time of their original construction.

History Matters researched and wrote the text, located illustrations, and designed the interpretive panel that stands in the courtyard of the new East Baltimore Community School. The interpretive panel explores the architecture of East Baltimore alley houses and the residents of Duncan Alley a neighborhood of 50 row houses that once lined the 20-foot-wide alley named Duncan Street that now is represented as a corridor in the new school.